How Augmented Reality Will Impact Airports

Augmented Reality, or AR, blends the virtual with the actual to make real life more engaging. And its influence over a wide range of industries is growing. From repairing cars to diagnosing health issues, there is so much that Augmented reality has already achieved. But how will its impact be felt in the world of air travel?

The Basics of AR 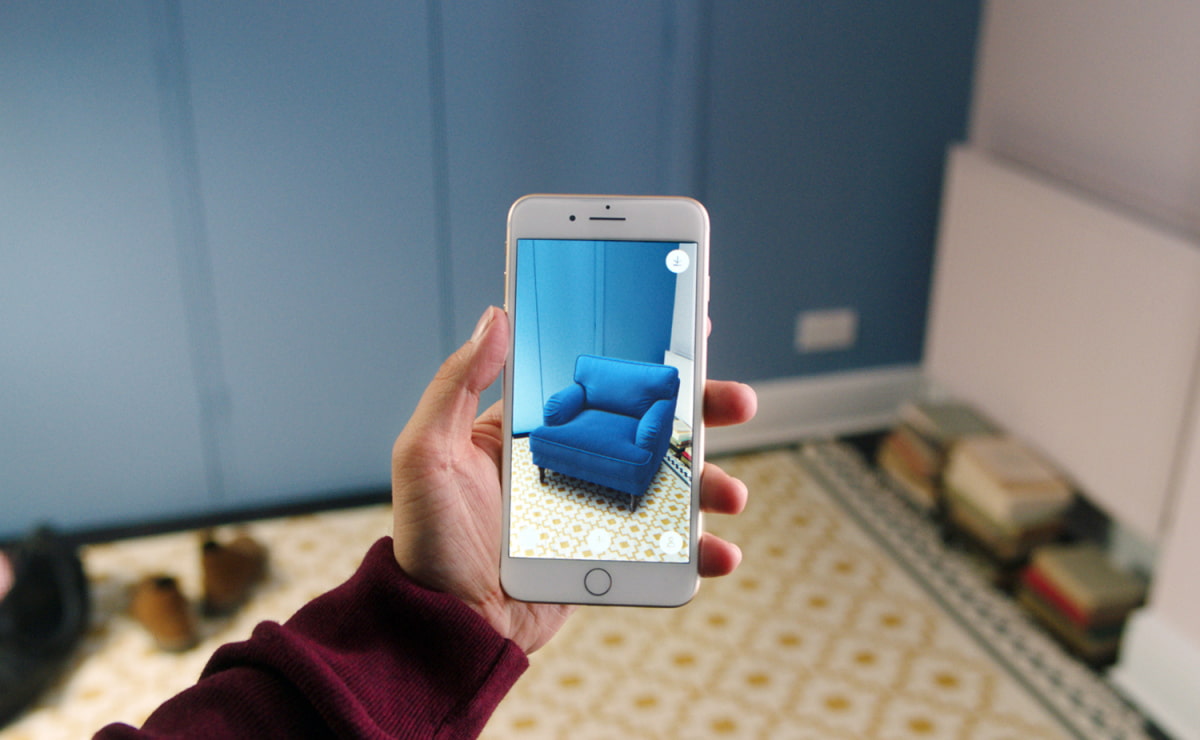 With AR, the world can be overlaid with information in real time, providing users with new ways to interact and engage with their surroundings. In combination with modern smartphones, it can provide practical benefits in daily life, as well as opening up new opportunities for interactive entertainment.

AR has been in the mainstream for years; even devices like the Nintendo 3DS offers augmented reality experiences. But the power of mobiles and the app ecosystems they support are poised to help it permeate even further. And from the point of view of airport visitors, AR wayfinding could be the next big thing.

What Is Augmented Reality Wayfinding? 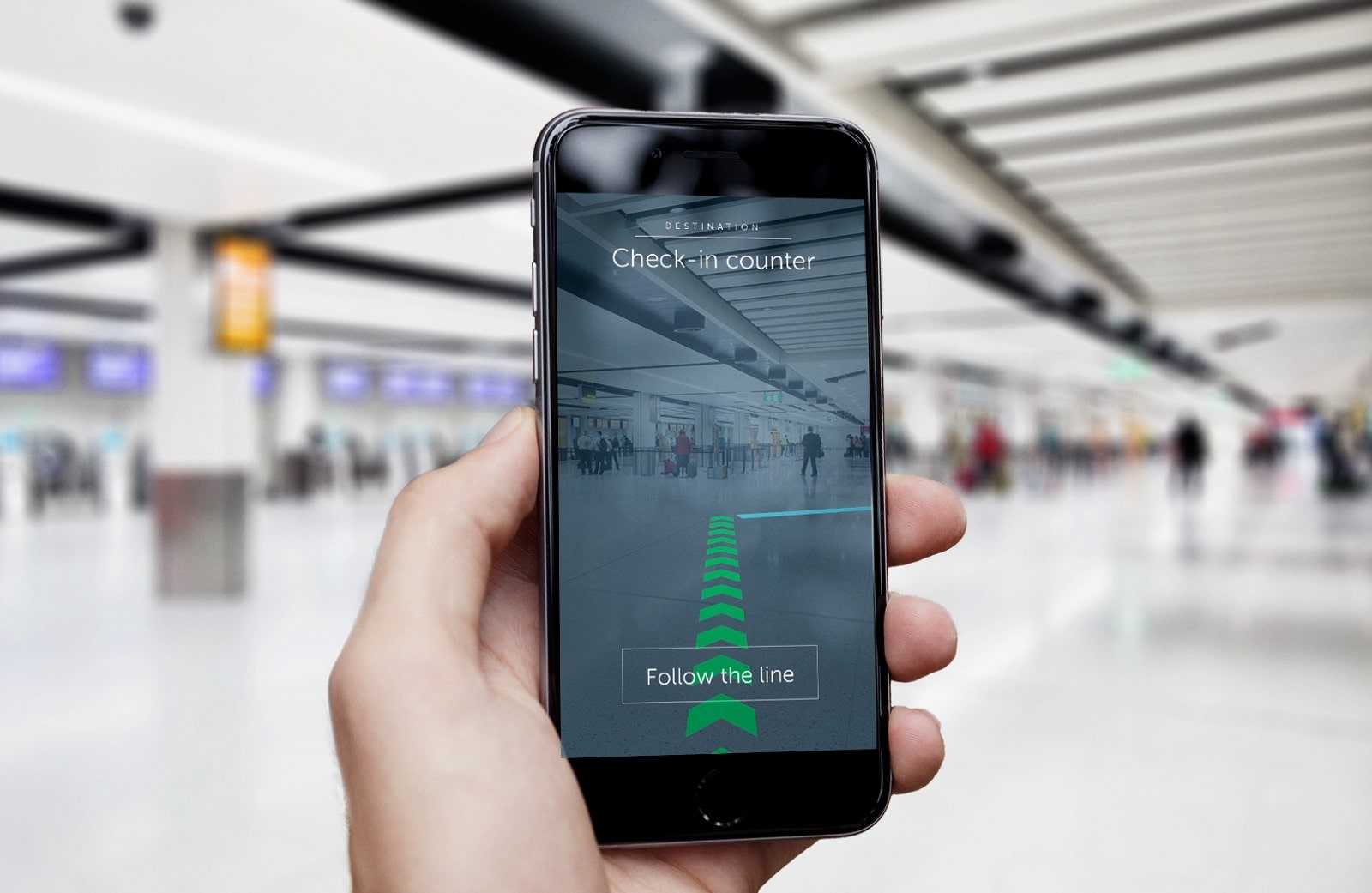 Navigating large public spaces, such as shopping centres and airports, is notoriously tricky. Visitors who are unfamiliar with the layout of a building or complex will need to consult a map, rely on traditional signage or ask an employee for assistance.

AR wayfinding is designed to streamline this process, making use of beacons which help to precisely locate a user within a particular area. An accompanying app can then deliver sat nav-style directions to their portable device, getting them where they need to go more quickly and efficiently. 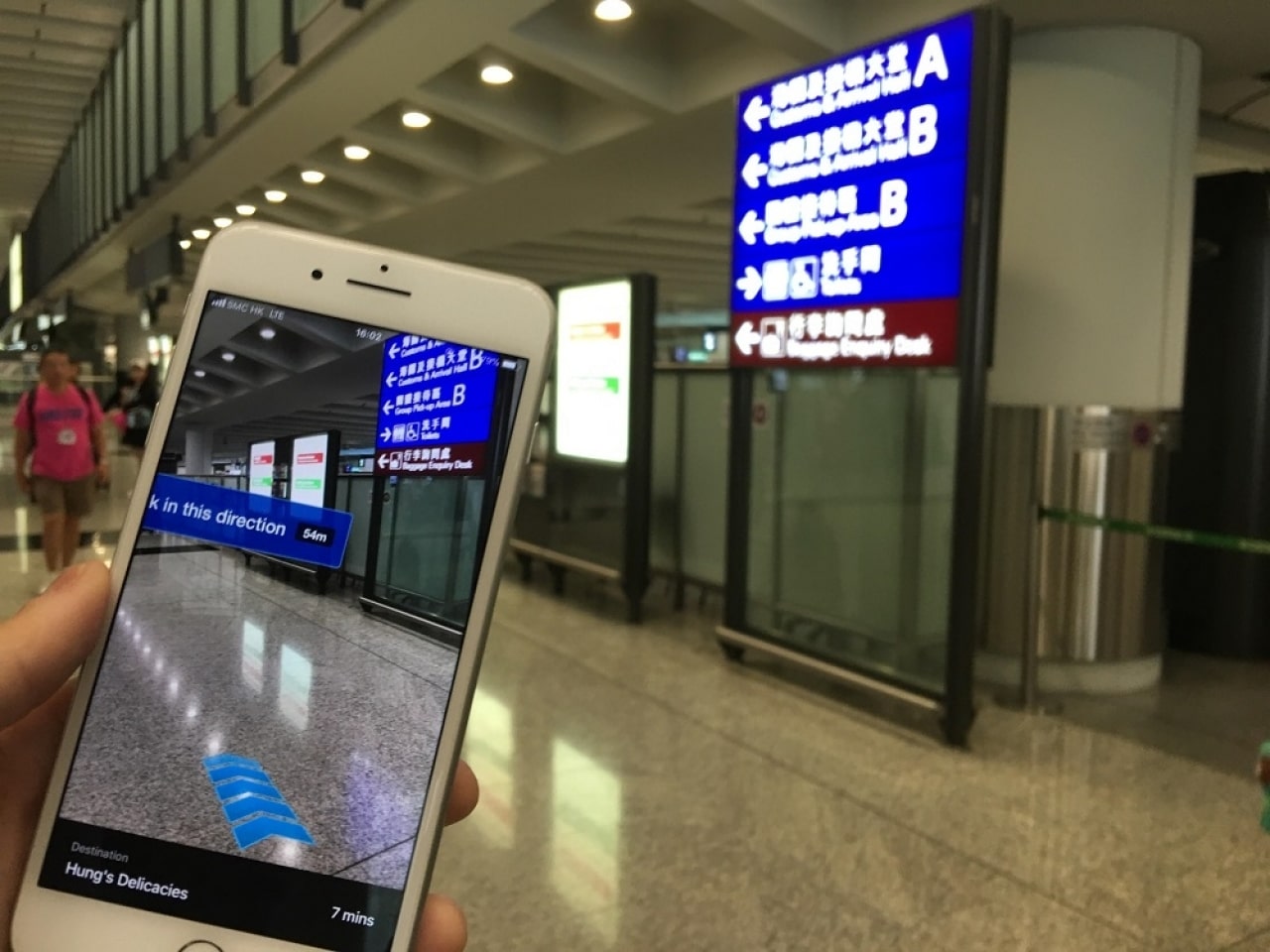 This tech will lead to all sorts of immediate changes. The old cliché of getting lost when trying to find a vehicle in an expansive airport car park will become a thing of the past, for example. The same goes for missing a flight because of confusion over terminal and gate numbers.

From a business perspective, Augmented Reality wayfinding will make it possible to monitor footfall incredibly accurately, provide location-based advertising to consumers and harvest data across a vast number of metrics. All of this will make it easier to optimise the way an organisation operates, especially in the case of an airport.

The Advantages of Augmented Reality Navigation

Airports can be intimidating places to visit for all but the most frequent of fliers. But with AR wayfinding, every passenger will have a digital trail of breadcrumbs to follow from the moment they arrive until the second they take their seat on the plane.

This will really come into its own when arriving in a foreign country where signage may not necessarily be in a traveller's native language. And of course Augmented Reality has the ability to translate text on the fly, which is another perk.

The next advantage is accuracy, since traditional sat nav can be patchy when used indoors. On the other hand, if an airport terminal building is rigged with its own beacons, an AR navigation app will easily be able to guide passengers and track their movements. This kind of consistent performance will be a big selling point.

Finally, with navigation handled via augmented reality, airports will feel less chaotic. The mad dash to the gate will be a thing of the past. Instead, people will move serenely from the departures lounge to catch their flight, knowing they have plenty of time to cover the distance. And ultimately airport operators and airlines will save money, which might help drive down ticket prices.

The Drawbacks of Augmented Reality Navigation

The first stumbling block of Augmented Reality navigation is the upfront cost. As well as having to shell out for expensive hardware to make it viable, there is the need to develop the software apps that will make use of its capabilities.

Larger organisations with significant resources at their disposal will be able to take a hit on the initial expense, so long as it can be recouped over the coming years. Smaller firms may have to wait for the cost to drop. So it is unlikely that this type of wayfinding will make its way into every car park or town centre in the near future.

Privacy is another sticking point; consumers may have concerns about allowing businesses to track their every move while they are on-site. And fears about the way that personal information is used and shared have grown in recent years after serious data loss scandals.

In addition, the stricter rules of the General Data Protection Regulation will give consumers greater powers over how their info is taken and stored by organisations. So there will be yet more hoops to jump through on the road to augmented reality navigation adoption. 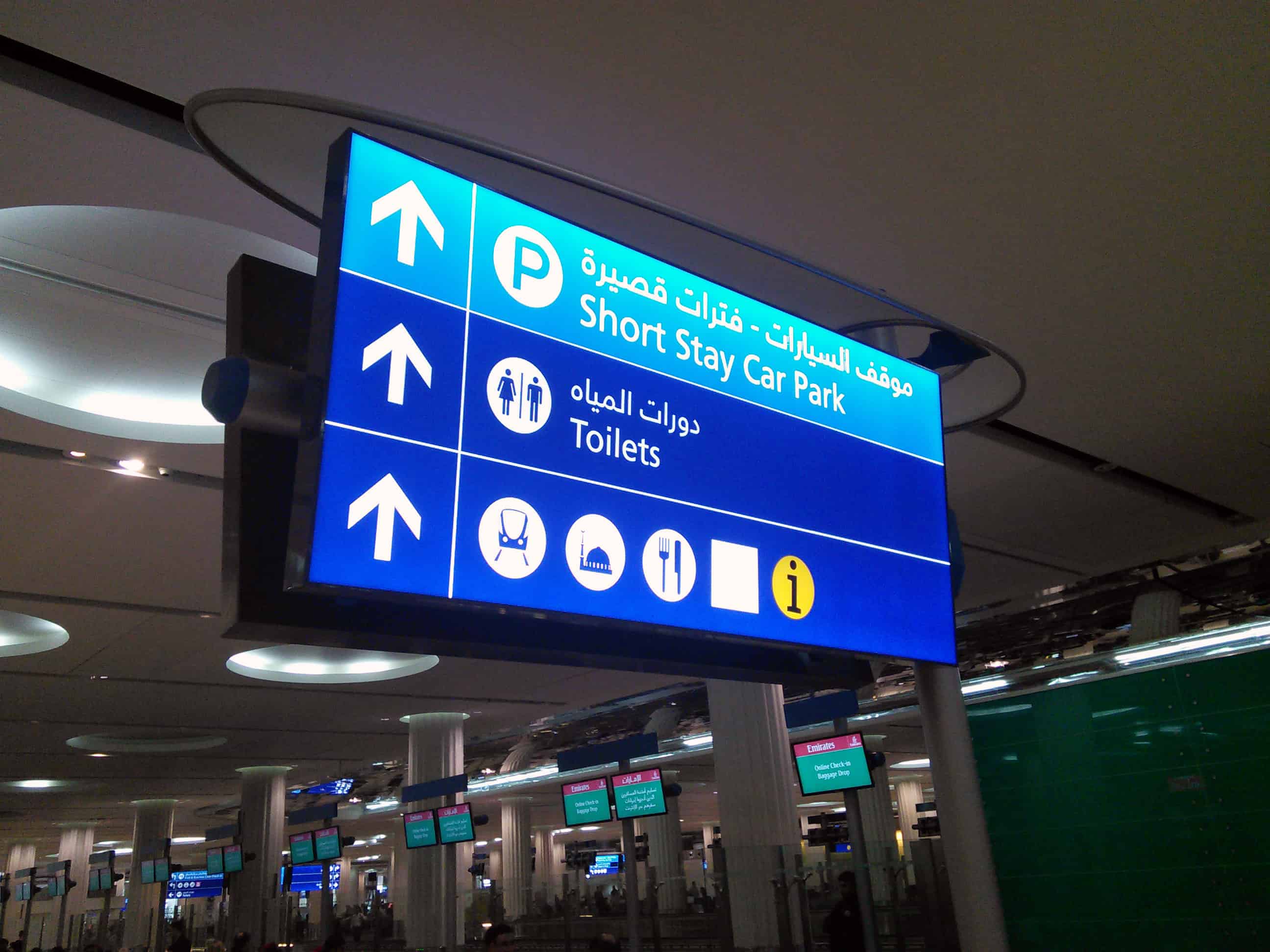 Finally there is the question of whether there is enough public interest in this technology to make it a worthwhile investment. Forcing smartphone users to install yet another app on their device if they want to use the wayfinding features that are available at an airport may be a step too far.

Even with the rise of the app over the past decade, a quarter of people give up on newly downloaded software after its first use. If passengers aren't going to stick with it, is AR wayfinding ever going to gain traction? 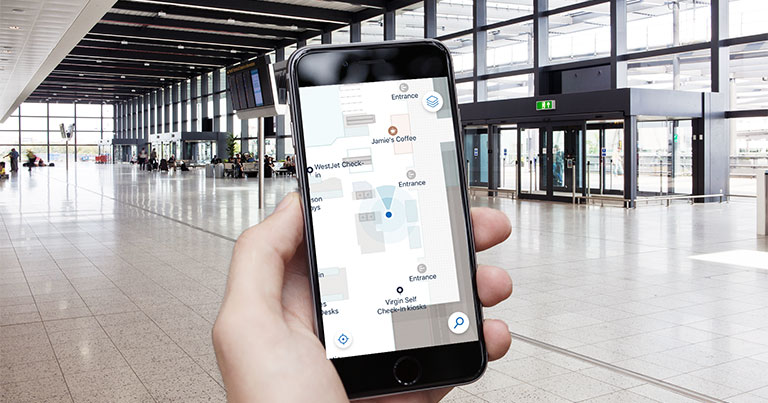 In 2017 the rollout of Augmented Reality navigation at Gatwick Airport hit the headlines. Thousands of beacons arrayed across the airport can track the location of passengers to within three metres.

The biggest advantage of this technology in an airport is not for passengers, but for its staff and the airlines that use it. It all comes down to managing visitors and avoiding delays.

Almost 45 million people pass through Gatwick each year, and even minor amounts of disruption can result in late departures, missed flights and misery for thousands of passengers. With the adoption of Augmented Reality wayfinding and the precise location capabilities it offers, getting in touch with latecomers is easy.

Alerts about lateness can be sent out in an instant. Airlines will even be able to decide whether or not it is worth pushing back the departure to wait for last minute arrivals because they know exactly how far away the guilty parties are from moment to moment. 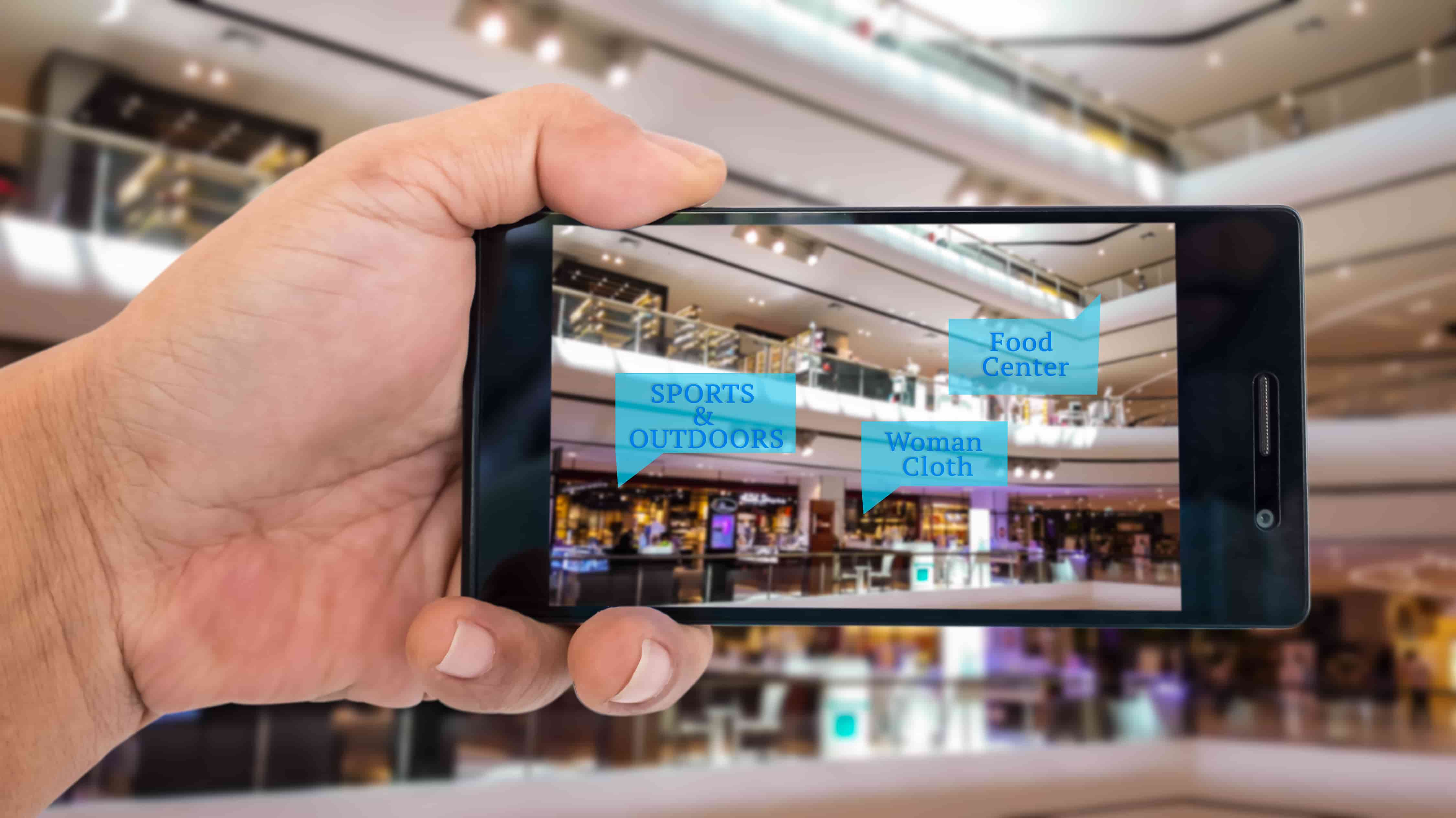 The beacons themselves are powered by batteries and are compatible with modern Bluetooth-enabled smartphones. This does mean that passengers will have to keep another form of connectivity active, burning through battery life a little faster. But as airports like Gatwick offer plenty of charging points, it should not be much of an issue.

This scheme also tackles one of the main downsides; privacy. Passengers will be required to actively consent to being tracked by the service. Anyone who is uncomfortable with the implications of AR wayfinding can opt out altogether and remain anonymous.

There are other examples of AR's impact on air travel. On the other side of the world, employees at Changi Airport in Singapore have put augmented reality into practice in a different way.

Cutting edge headsets allow members of the ground crew to handle cargo in less time. This is possible thanks to QR codes that instantly provide info on things like the weight of containers and where they need to be placed in the body of each plane.

The downside is that these headsets are power hungry and can only run for 60 minutes before they need to be recharged. Such hurdles lie in the way of wider AR usage on the consumer side of the fence. The image of people wandering around with their smartphones out, trying to find where they parked their car before the battery dies is one that springs to mind.

The Future of AR in Airports 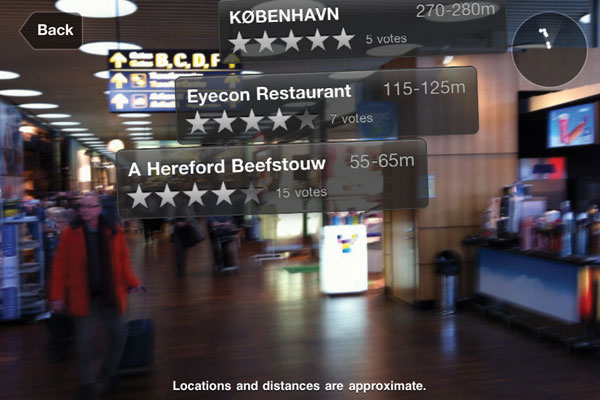 When it comes to augmented reality airports like Gatwick have almost as many opportunities to grasp as there are challenges to overcome. And looking to the future, you can envision a number of different scenarios playing out as the technology develops.

Giving third parties access to the data will throw up fresh ways to engage with passengers. So long as consent is given, people could choose to have offers sent to them by shops and restaurants at airports as they pass by. Choosing what to buy and where to eat using AR could become standard practice. In addition, each time potential consumers walk past a shop reviews would also be displayed on screen.

Parking companies operating outside of the airport could also leverage this data. Using the location of customers to dispatch shuttle buses and cabs for pick-up will boost efficiency. And for customers, the hassle of having to place the call themselves when they arrive will be eliminated. 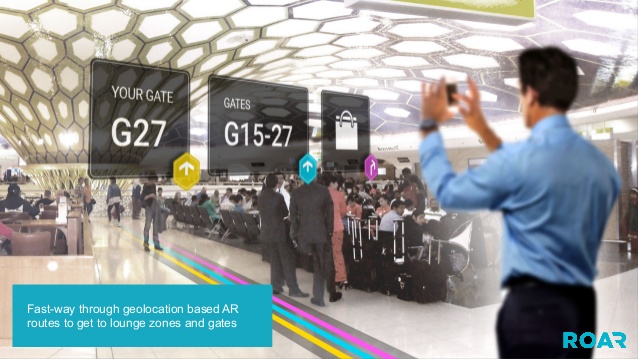 Eventually wayfinding signage may disappear altogether. Even the screens which display updates on departures and arrivals will go the way of the dodo if every passenger has a smartphone with augmented reality GPS navigation on hand.

If this happens, the airports of the future will look very different. Shop signs, advertisement hoardings, restaurant menus and more might become obsolete. Smart contact lenses with built-in AR abilities are already on the way, breaking down more barriers to adoption and use.

What sounds like science fiction today could become a common place sooner than expected. And in the future, people will quite literally see things differently thanks to AR.

These articles may interest you…